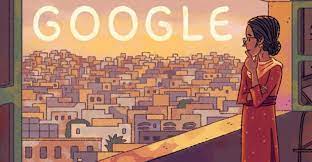 Google salutes Perween Rahman on her 65th birthday. She was born in 1957 in Dhaka, Pakistan.

The doodle depicts her life in great detail. It unveils Rahman deep concern over the infrastructure of the city. Her love for Urban planning is shown by a map on the wall with pins and routes. Under the map drawing board and geometric tools reflects her fondness for architecture. But simplicity is evident in the doodle that was a prominent feature of her life.

As she left her homeland and shifted to Pakistan, this rearrangement is portrayed in each and every aspect of her life. Her involvement in Orangi Poilt Project as a volunteer first and then as a leader. This project focused on healthcare, housing and sanitation of the Orangi Town. Orangi Town was one of the world’s largest informal settlements at that time. Under leadership of Parween Rahman Orangi Pilot Project set up 650 private schools, 700 medical clinics, and 40,000 small businesses. She received many national and international awards for her love for humanity. She was also

awarded by Sitara-e-Shujaat (Order of Bravery award) by the Government of Pakistan.

Unfortunately, this shining star was assassinated in 2013 by four gunmen near Pirabad Police Station. Her 28 years struggle to uplift the marginalized communities was ended in few seconds.